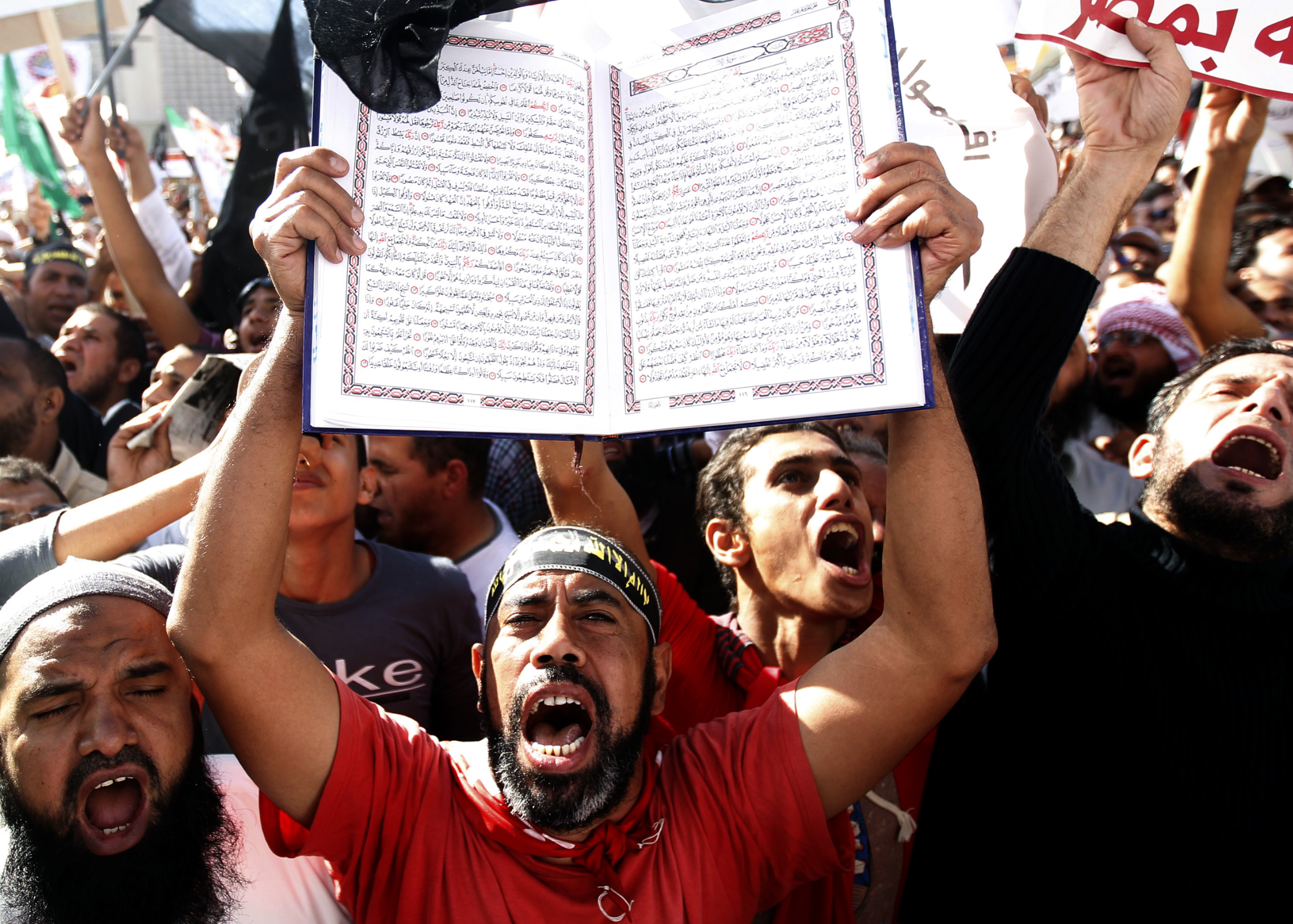 Despite the presence of some Salafi organizations, overall, Salafists have not banded under a unified leadership or organizational structure, such as the case with the Muslim Brothers. Rather, there are a number of prominent and lesser known Salafi sheikhs with disparate groups of followers.

Al-Sunna Al-Muhammadeyya Society was founded in 1926 by Sheikh Mohamed Hamed El-Fiqi (d.), a 1916 graduate of Al-Azhar and a student of the famed Muslim reformer Muhammed Abdu (d.) Also known as Ansar Al-Sunna, the society is considered the main Salafi group in Egypt.

El-Fiqi’s preaching focused on pure monotheism and the protection of Sunna. His ideas were resentful of Sufism, which was considered a source of un-Islamic practices and belief in superstition. Under al-Fiqqi’s leadership, Ansar Al-Sunna proclaimed its dedication to tawhid as preached by Ibn Taymeyya (d.). Ansar Al-Sunna was, for many years, led by members of Egypt’s Azharite elite (Gauvain, 2010).

Like other Salafi trends, and according to the organization’s Facebook page, the society advocates monotheism and fighting un-Islamic practices and beliefs, including praying at shrines. The society strongly rejects using violence against the government as violence only leads to internal strife.

The society is suspicious of the Sufi influence on Al-Azhar and advocates for a re-establishment of the Islamic Caliphate. The society accepts electoral participation through running for office and voting.

The society focuses on fighting innovation in religion, but in general does not address controversial issues in the Egyptian context such as issues of governance. This apolitical approach gave the society a level of freedom from the security establishment which allowed it to act as an umbrella organization for other Salafi groups in Egypt.

However, in a fatwa published by Ansar Al-Sunna on the permissibility of participating in the January 2011 revolution, the fatwa says: "Going against a Muslim ruler who rules by the Sharia of Allah, performed prayers among the Muslims, and did not show outright infidelity, then the way of Ahl Al-Sunna rules that this is not permissible, even if he transgresses and creates injustices…"

Regarding participation in elections, the following fatwa reflects the position of Ansar Al-Sunna: "In summary, the basic premise is not to participate in elections given what they include from bad aspects [the quest for political power]." The fatwa goes on to say: "if interests and negative aspects are crowding in this sphere [of elections], and the people of knowledge in the country perceive that participation can achieve a purpose that supersedes the negative aspects, then participation is permissible in this case."

Al-Da’wa Al-Salafeyya (The Salafi Calling) is the outcome of student activism during the 1970s, which resulted in the creation of Al-Jama’a Al-Islamiyya. While many of the members of Al-Jama’a Al-Islamiyya joined the Muslim Brotherhood, a number of them, mainly from Alexandria University, led by Mohammad Ismail al-Muqaddim, were influenced by Salafist thought from Saudi Arabia and established the foundations of the Salafist Calling between 1972 and 1977.

Many of the founders of the Salafist Calling, such as Muqaddim and Ahmed Farid, were students in Alexandria University who refused to join the Muslim Brotherhood.

After a violent clash between students from the Salafi movement and the Muslim Brotherhood in Alexandria University in 1980, the Salafis decided to institutionalize their activities. They first called themselves “The Salafist School.” Mohamed Abdel Fattah (Abu Idris) became the first leader of this group. He was called “Kayyem” instead of “Emir” since the group perceived the later to be confined matters of the state.

After years of activism, the name of the groups was changed to “The Salafist Calling.” They are well known by the name “Salafists of Alexandria,” the city of the group’s origin. Among the important figures in this group are Muhammad Ismail al-Muqaddam, Ahmed Farid, Said Abdel-Azim, Mohamed Abdel-Fattah, Yasser Brahimi, Ahmed Hatiba, Abdel-Moneim al-Shahat, Mahmoud Abdel-Hamid and Abu Idris. Famous preachers include Mohamed Hassan, Mohamed Hussein Yakoub, and Abu Ishaq Al-Huweini belong this trend.

Alexandria Salafists perceive political participation as religiously forbidden. However, this rejection of political participation does not mean they are not concerned with politics. Their approach is based on framing politics through an Islamic legal and theoretical lens, and they discuss daily issues in the Egyptian life, unlike Ansar Al-Sunna.

The Salafists of Alexandria also believe that the ruler who does not implement Sharia is an infidel, however they do not believe in saying this publicly unless there is clear evidence. The Salafist Calling refuses working with or through the state’s official institutions, charging that the institutions are un-Islamic.

This general rejection of state institutions is a subject of internal debate by Salafist scholars such as Mohamed Hassan, who calls for involvement in politics and establishing political parties. Some the group’s activists, including Abi Idrais, were detained and their magazine South Al-Da’wa (The Voice of the Calling) was suspended by the Mubarak regime, yet the group remained active mainly in universities.

As reported by Al-Ahram, the first elections of Al-Da’wa Al-Salafeyya in June 2011 witnessed the election of Sheikh Abdul Fattah (Abu Idris) as President, Sheikh Yasser Borhamy as First Deputy, and Sheikh Saeed Abdul Azeem as second deputy. Mohamed Ismael Al-Mokaddem, Ahmed Farid, and Ahmed Heteiba refused to run for any of the administrative offices.

As reported by the Danish Egyptian Dialogue Institute, well known preacher who belongs to The Salafi Calling, Mohamed Hussein Yaccoub, raised outcry during the March of 2011 referendum when he said that those persons who voted “No” to the referendums “don’t want to live in an Islamic country, cannot coexist with the democratic majority, and should simply immigrate to other western cities.”

According to Al-Masry Al-Youm, Yaccoub apologized for the remarks, saying that he was joking, does not want to get involved in politics, join a political party, or run for office.

The group is also known as “Al-Gameyya” after Mohamed Aman Al-Gamy, a scholar originally from Ethiopia, considered the original founder of this trend. The group began on a platform that criticized the invasion of Iraq and the presence of foreign forces in majority Muslim lands.

However, Al-Mudkhaliyya Salafis do not hold that the presence of foreign troops in Arab lands is outright forbidden by Islam. Al-Madkhaliyya Salafis do not support opposition to a Muslim ruler, even if he does not implement Sharia. Al-Madkhaliyya also hold that accepting the ruler itself is not enough if the individual or group does not recognize the state’s institutions, such as the Mufti and Al-Azhar.

According to this position, no one has the right to disobey a fatwa by the official religious scholars or the state religious institutions. Furthermore, Al-Madkhaliyya Salafists reject Islamist groups for circumventing the power of the state and as a rule abide by human laws even if they do not follow the Sharia.

Al-Madkhaliyya Salafism has attacked almost all other Salafist trends in Egypt. The fiercest attack was against activist Salafism (see below). For example, Mohamed Raslan accused activist Salafism of enticing revolution and internal strife and describes the trend as a failure. Mahmoud Lotfy Amer, on the other hand, accused the Salafists of Alexandria of being Qutbists (after Sayyid Qutb).

This trend started in Shubra, a neighborhood in Cairo in the 1970s, during the same period when Alexandria Salafism emerged. Activist Salafism is almost identical with that of Al-Da’wa Al-Salafeyya (Alexandria Salafism). The main difference lies in that activist Salafis do not only judge the ruler as infidel, but they make this claim public if the ruler does not rule according to Sharia.

They also reject participation in representative assemblies since assemblies abide by human-made law and make the constitution the main arbiter. Activist Salafism rejects the creation of a separate group for themselves in order not to increase the division in the Muslim community.

However, they encourage followers to cooperate with other groups in the political arena as long as this group aims at creating an Islamic state or reestablishing the Caliphate.

One of the most prominent scholars of this trend is Sheikh Fawzy Said. Other important scholars include Mohamed Abdel-Maksoud, Dr. Sayyed El-Araby, Sheikh Fawzy El-Sa’eed, and Sheikh Nash’at Ibrahim.

Following these speeches, this trend came under the scrutiny of the security apparatus. Nash’at Ibrahim and Fawzy Sa’eed were detained. They were released a few years later.

This is a precursor of Al-Sunna Al-Muhammadeyya Society. It was established in 1912 by Sheikh Mahmoud Khattab Al-Sobky. It is still active in the social domain in Egypt. It aims at teaching and promoting adherence to Sunna and has branches throughout the country. It offers one of the most prominent philanthropic networks in Egypt.

Sheikh Sobky believed in collective organization away from politics. He adopted the principle of being concerned with politics but not involved in it. He therefore stressed that Al-Gam’eyya does not address political issues that are the responsibility of those in power. This approach allowed the society to avoid security harassment and continue its operations.

The society published a magazine called Al-E’tessam, which was nonetheless banned by President Sadat in 1981. In recent years, Al-Gam’eyya Al-Shar’eyya published Al-Tebyan, which also reflected political interests. The organization’s president as of 2011 is Mohamed Mokhta Mohamed El-Mahdy, an al-Azhar scholar.