On The Permissibility Of Muslim Military Personnel Within The U.S. Armed Forces Participating In The War Operations And Related Efforts In Afghanistan And In Other Muslim Countries 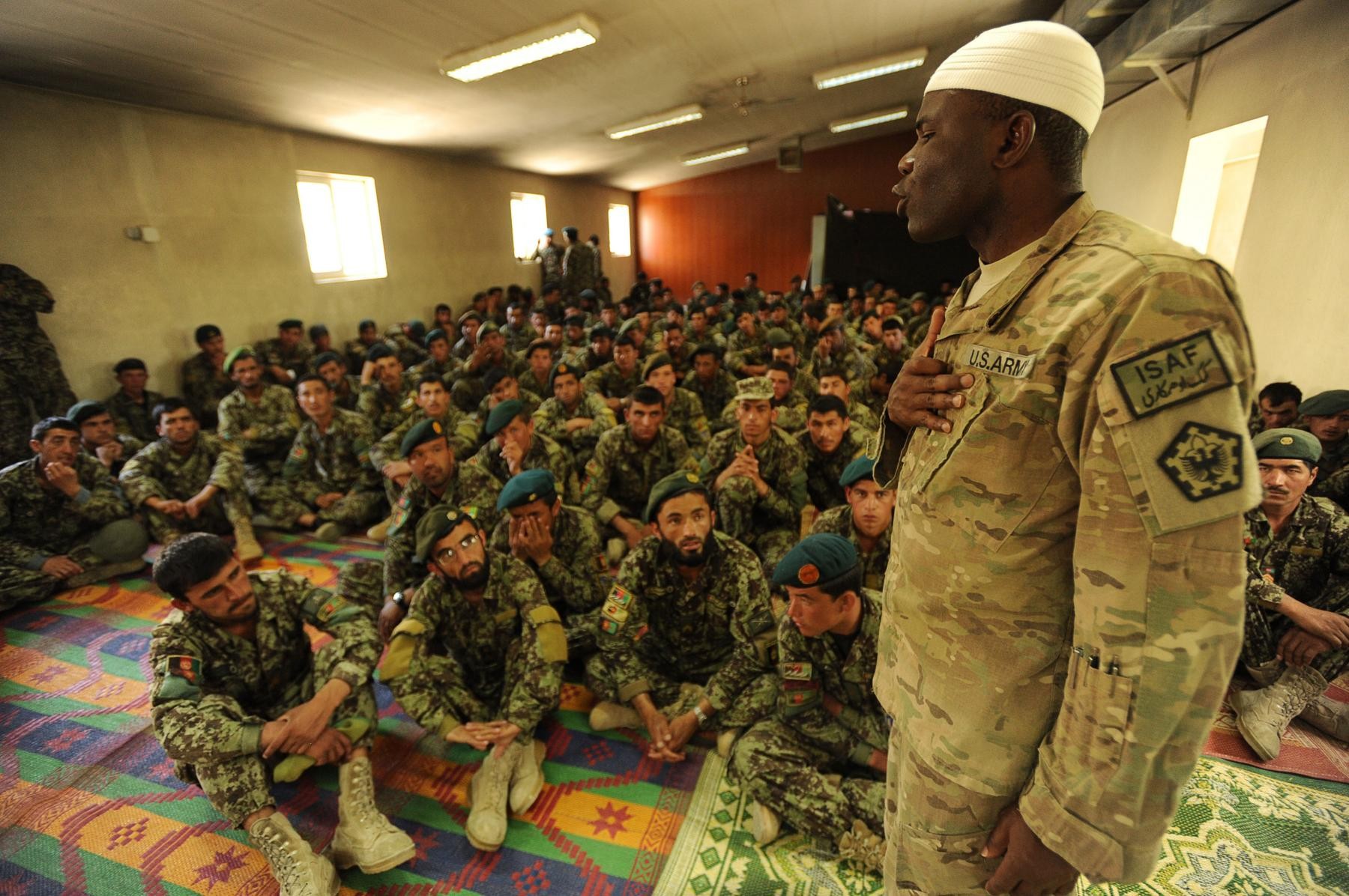 On The Permissibility Of Muslim Military Personnel Within The U.S. Armed Forces Participating In The War Operations And Related Efforts In Afghanistan And In Other Muslim Countries

This question presents a very complicated issue and a highly sensitive situation for our Muslim brothers and sisters serving in the American army as well as other armies that face similar situations.

All Muslims ought to be united against all those who terrorize the innocents, and those who permit the killing of non-combatants without a justifiable reason. Islam has declared the spilling of blood and the destruction of property as absolute prohibitions until the Day of Judgment.

We ordained unto the Children of Israel that if anyone killed a human being unless it be in punishment for murder or for spreading mischief on earth it would be as though he killed all of humanity; whereas, if anyone saved a life, it would be as though he saved the life of all humanity. And indeed, there came to them Our messengers with clear signs (proofs and evidences), even then after that, many of them continued to commit mischief on earth.

Hence, whoever violates these pointed Islamic texts is an offender deserving of the appropriate punishment according to their offense and according to its consequences for destruction and mischief.

It's incumbent upon our military brothers in the American armed forces to make this stand and its religious reasoning well known to all their superiors, as well as to their peers, and to voice it and not to be silent. Conveying this is part of the true nature of the Islamic teachings that have often been distorted or smeared by the media.

If the terrorist acts that took place in the U.S. were considered by the Islamic Law (sharia) or the rules of Islamic jurisprudence (fiqh), the ruling for the crime of "hirabah" (waging war against society) would be applied to their doers.

The recompense of those who wage war against God and His Messenger and do mischief on earth is only that they shall be killed or crucified or their hands and their feet be cut off from opposite sides, or be exiled from the land. That is their disgrace in this world, and a great torment is theirs in the Hereafter. Except for those who (having fled away and then) came back with repentance before they fall into your power; (in that case) know that God is Oft-Forgiving, Most Merciful.

Therefore, we find it necessary to apprehend the true perpetrators of these crimes, as well as those who aid and abet them through incitement, financing or other support.

They must be brought to justice in an impartial court of law and punish them appropriately, so that it could act as deterrent to them and to others like them who easily slay the lives of innocents, destroy properties and terrorize people.

On the other hand, the source of the uneasiness that American Muslim military men and women may have in fighting other Muslims is because it's often difficult if not impossible to differentiate between the real perpetrators who are being pursued, and the innocents who have committed no crime at all.

When two Muslims face each other in fighting and one kills the other, then both the killer and the killed are in the hell-fire. Someone said: we understand that the killer is in hell, why then the one who's being killed? The prophet said: because he wanted to kill the other person.

In this case, he has no choice but to follow orders, otherwise his allegiance and loyalty to his country could be in doubt. This would subject him to much harm since he would not enjoy the privileges of citizenship without performing its obligations.

The Muslim (soldier) must perform his duty in this fight despite the feeling of uneasiness of "fighting without discriminating." His intention (niyya) must be to fight for enjoining of the truth and defeating falsehood. It's to prevent aggression on the innocents, or to apprehend the perpetrators and bring them to justice.

It's not his concern what other consequences of the fighting that might result in his personal discomfort, since he alone can neither control it nor prevent it. Furthermore, all deeds are accounted (by God) according to the intentions. God (the Most High) does not burden any soul except what it can bear.

In addition, Muslim jurists have ruled that what a Muslim cannot control he cannot be held accountable for.

The Muslim here is a part of a whole, if he absconds, his departure will result in a greater harm, not only for him but also for the Muslim community in his country - and here there are many millions of them.

Moreover, even if fighting causes him discomfort spiritually or psychologically, this personal hardship must be endured for the greater public good, as the jurisprudence (fiqhi) rule states.

Furthermore, the questioner inquires about the possibility of the Muslim military personnel in the American armed forces to serve in the back lines - such as in the relief services' sector and similar works.

If such requests are granted by the authorities, without reservation or harm to the soldiers, or to the other American Muslim citizens, then they should request that.

Otherwise, if such request raises doubts about their allegiance or loyalty, cast suspicions, present them with false accusations, harm their future careers, shed misgivings on their patriotism, or similar sentiments, then it's not permissible to ask for that.

To sum up, it's acceptable God willing for Muslim American military personnel to partake in the fighting in the upcoming battles, against whomever, their country decides, has perpetrated terrorism against them.

Keeping in mind to have the proper intention as explained earlier, so no doubts would be cast about their loyalty to their country, or to prevent harm to befall them as might be expected.

This is in accordance with the Islamic jurisprudence rules which state that necessities dictate exceptions, as well as the rule that says one may endure a small harm to avoid a much greater harm.

It was published in The Washington Post on October 11, 2001. The inquiry was presented by Mr. Muhammad Abdur-Rashid, the senior Muslim chaplain in the American Armed forces prior to the U.S. invasion of Afghanistan in October 2001. In his question he states that the goals of the (war) operations are:

Furthermore, he concludes his inquiry by mentioning that the number of Muslim military personnel in the three branches of the American armed forces exceeds fifteen thousand soldiers.

Hence, if they refuse to participate in the fighting, they will have no choice but to resign, which might also entail other consequences. Finally, he asks if it is permissible for those who can transfer to serve in different capacities other than direct fighting.