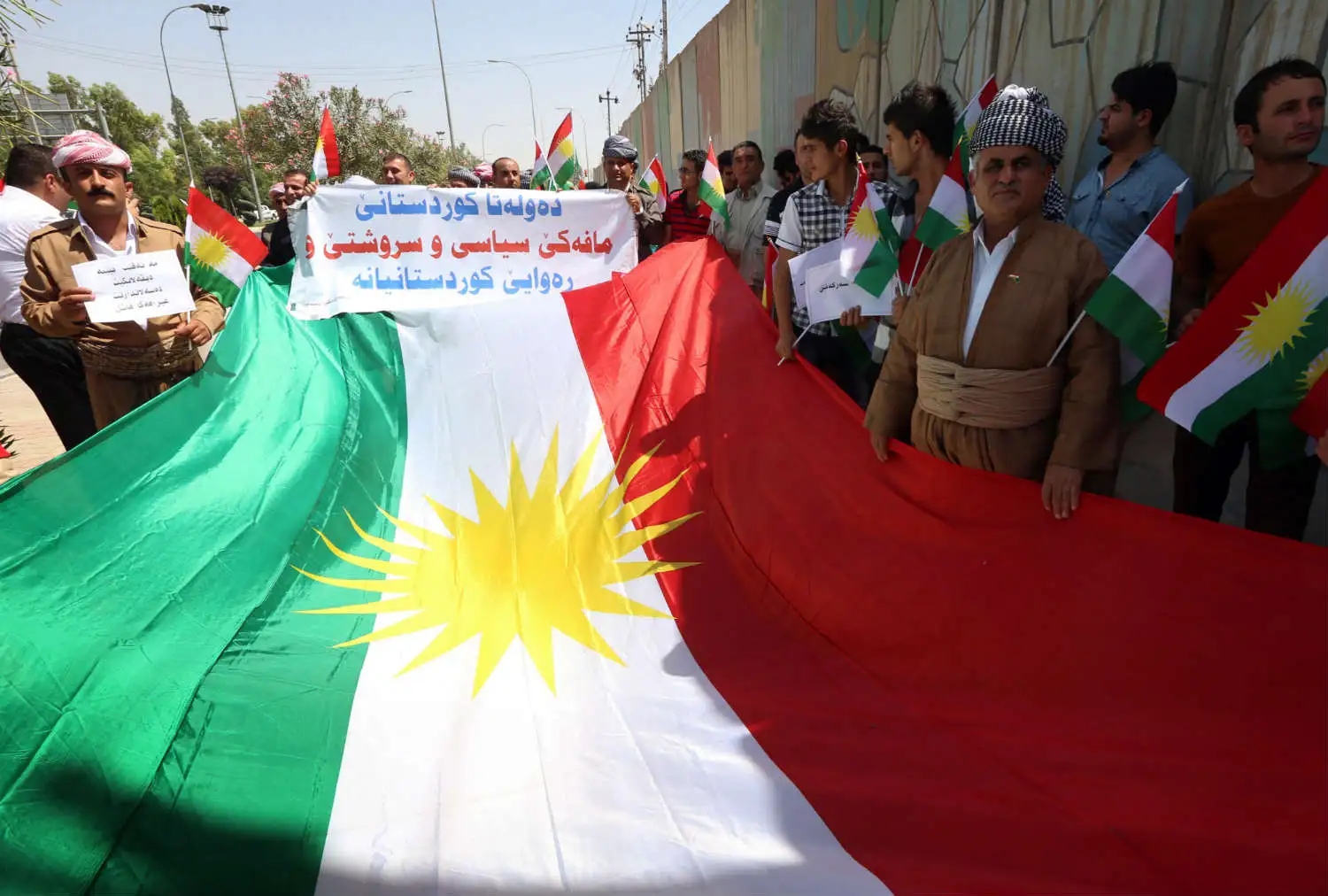 The Kurds are Indo-European people that live in a region that spans Turkey, Iran, Syria, Armenia, and Iraq. Iraqi Kurds make up approximately 17 percent of the country’s population, numbering between 5-7 million.

Most reside in Iraq’s northern regions, in the four provinces of Irbil (also spelled “Erbil,” or “Arbil”), Suleymana, Kirkuk, and Kohuk. Around 90 percent of Iraqi Kurds are Sunni, and the remainder is Shi’ite, 150,000 of which reside in and around Baghdad and the northern Iran-Iraq border east of the capital.

A small minority are Christian, Yezidi, Baha’i, and, until their recent departure from Iraq, Jewish. Most Kurds see themselves as an ethnically distinct, autonomous or semi-autonomous component of Iraq, identifying closely with their ethnic Kurdish identity.

Kurdish nationalism has traditionally overshadowed allegiance to the Iraqi state and thus blurred the role of Sunni Islam as a cohesive force. This was especially true under Baathist pan-Arabism, which by definition excluded Kurds.

Under the Saddam regime, Kurds suffered brutal campaigns of violence and ethnic cleansing, the most notorious of which is al-Anfal, conducted between 1986 and 1989. Al-Anfal left some two million Kurds dead, thousands of which were killed by chemical weapons.

Since the fall of the regime, most Kurds have continued to seek measures of autonomy from Iraq. The issue has been particularly controversial due to the oil-rich Kirkuk region which Kurds claim as their own despite Arabization policies under the former regime.

According to Article 140 of the Iraqi constitution, the question of Kurdish-Arab disputed territories was to be resolved in a three-step process of normalization, census, and referendum, a process which has yet to be completed.

Kurdish observers concerned about the outcome of any such referendum in Kirkuk point to the continued growth of the province’s Arab population. One Deputy Parliament Speaker, Aref Taifour, went so far as to call upon the estimated 15,000 Arab families who settled in the region under the former regime to return to “their original provinces” and not to be counted in the upcoming election.

A late January 2014 announcement by the government that a committee would be formed to “develop the controls and standards to support transforming” Tuz Khurmato, Fallujah, and the Nineveh Plains districts in provinces, and that a draft law would be proposed for the same end regarding Talafar district, provoked widespread controversy.

Many of these proposed provinces were home to minority populations, including the Turkmen of Tuz Khurmato and Talafar and the Assyrians of the Nineveh Plains. Tuz Khurmato, a disputed area, had previously requested to return to the governance of Kirkuk province and become part of the KRG, citing security neglect.

Kurds speak an Indo-European language related to Persian, and maintain certain aspects of Persian culture such as the celebration of the Persian New Year, Nowruz. Most adopted Islam nearly four several centuries later than the surrounding population.

Kurdish tribes also share many of the same characteristics as their Arab counterparts. Many were traditionally rural dwellers closely allied with familial and tribal affiliations.

Tribes exercised varying degrees of autonomy as part of larger tribal confederacies. Such affiliations have remained largely influential in Kurdish society, both galvanizing a united Kurdish front on one hand, and fragmenting its homogeneity on another.

The longstanding Kurdish Democratic Party (KDP), for instance, was founded and continues to be led by the influential Barzani family which adheres to the Naqshabandi order of Sufi’ism and has a traditionalist-conservative tribal support base.

The party was established in 1946 by Massoud Barzani and currently led by his son, Mustafa Barzani, endorsing Kurdish unity and independence, which, according to its party platform, currently requires a democratic, pluralistic, and federal Iraqi state.

The second major Kurdish party, the Patriotic Union of Kurdistan (PUK), is currently led by Jalal Talabani and was founded in 1975 to counter the KPD with a more secular urban, intellectual, and socialist platform.

The party at the time had criticized its rival as being “feudalist, tribalist, bourgeois rightist and capitulationist.” Though the PUK accommodates a more inclusive spectrum of Kurdish nationalist views, it still maintains a tribal support-base, garnering followers from Sorani-speaking tribes who rival the Barzani clan, as well as from the Qadiri order of Sufiism to which Talabani subscribes (Romano, 2006, p. 197).

Though Kurdish tribalism is Islamic in nature, religion has traditionally taken a secondary role to Kurdish nationalism. In recent years, however, especially since 2003, Islam has become a prominent and dynamic force in both the public and private spheres.

Religious political parties such as the Islamist Kurdistan Islamic Union (KIU), modeled on Egypt’s Muslim Brotherhood, have garnered increasing support amongst a younger generation of Kurds and across university campuses, especially in the wake of regional protest movements in 2010-2011.

Additionally, Kurdish Muslim clerics have had a growing presence in the Kurdish political sphere, joining public protests for improved services in otherwise secular areas, and in some cases, calling for “jihad” against corruption.

The Islamic Scholars Union of Kurdistan, considered the highest union of Sunni Kurdish religious scholars, has also drawn attention, issuing fatwas dealing with the increasingly prominent issues of the role of Islam in the post-Saddam Iraqi regime.

A decision, issued in 2008 by Kurdish government authorities, established that honor-killings would be treated as murder in Kurdish provinces, even though Iraq’s general criminal code does not (the Iraqi code provides mitigated prison sentences for those who kill for reasons related to honor).

Honor-killings especially remain a widespread problem despite the introduction of the 2008 law, since social norms continue to dictate conditions and many cases go unreported to authorities.

Socioeconomic factors have also played a major role in the community and have set it apart from others in Iraq. Under the Saddam-regime, the country’s northern resources were either left underutilized or revenue from them was redirected to the regime, leaving the local infrastructure extremely weak.

However, while a large portion of Iraqi land is non-arable, the northern Kurdish region is rich with natural resources that include fertile land, water, oil, and natural gas. Many families have relied on the region’s land and the nomadic herding economy that its mountainous terrain allows for, along with agricultural production in the foothills.

Additionally, many Kurds today work in urban areas, and while income on average is higher for Iraq’s Kurds than in the rest of the country, the lack of job opportunities has become a growing problem.

Unemployment, which stood at 20 percent at the beginning of 2011, continues to be a major challenge, especially since more than half of Iraqi Kurds are currently under the age of 20.

The majority of Kurdish city-dwellers work in construction, trade, and most often, as civil servants; nearly half of the community is employed by the government.

Like Iraq’s southern Shi’ite regions, religious tourism has also been gaining popularity and is considered a potential source of income.

The Kurdish government’s Ministry of Religious endowment claims that more than one million visitors came to Iraq’s Kurdish provinces in 2010.

Efforts to improve the local economy have been marked by reconstruction programs implemented since 2003 that include the construction of roads, schools, hospitals, and airports.